What About Michael Jackson? 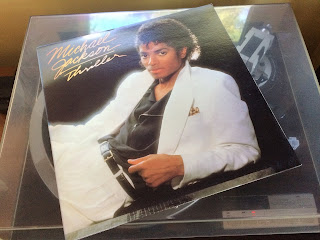 Like just about everyone my age, I knew of and listened to Michael Jackson, both as a member of the Jackson 5 and as a solo performer. I grew up with him as we were about the same age. I learned and became good at falsetto by trying to sing along with him on the radio. I liked his songs, for the most part, and had a minor fascination with how mega-fame basically destroyed him. Not actually knowing him makes that last statement a matter of conjecture.

With the latest allegations swirling around him, as they had with Bill Cosby, Louie CK, and the excesses of rock throughout its history, but mostly the 60's through the 90's, the question-and the demand from some-is whether to stop listening to his creative output.

Whether I continue to listen to Thriller or Off The Wall, the only albums of his I own, is up to me.

I don't know that the value of the songs or the albums is necessarily harmed by the allegations. I say that for two reasons, one they weren't meant, as far as I know, to be a part of Jackson's alleged actions with children, and two, the man is dead. This matters far more than most are willing to concede.

For his family and his legacy, it's a very big deal, perhaps to the point of his having nothing left beyond the allegations, but for the rest of us, especially those of us who grew up with the music, I think it's more nuanced. The music is what I was drawn to, as it was with all the people I've listened to over the years, and with a few exceptions, I don't personally know any of them. So whatever behavior they're acclaimed or criticised for, has always come to me through the filter of the media and all the entities that inform it. If Jackson's attraction to boys is there in the music, I don't hear it.

I won't deny that I thought his transformations after Thriller were odd, but again, I wasn't privy to any of it other than what I saw and heard through the media. I thought the subsequent albums and songs were good, but I didn't think they were any better than Thriller and Off The Wall.

The bigger question is whether it makes me a bad person or complicite is his actions simply because I liked a couple of his albums, and for the record, I thought Off The Wall was better than Thriller over all. I don't see how it could. I already own the albums, and even if I replaced them, Jackson himself would not personally profit. Nor do I see how that denotes anything other than I liked his music. Too often we internalize that which we actually have no control over. If Jackson was indeed a pedophile, the onus of that falls on him and the people who knew rather than the casual fan or even the fanatical who other than through his music or merchandize had nothing to do with him.

Whether I still listen to Billie Jean isn't and won't be a tacit acceptance by me of Jackson's personal behavior; it just means I like the song.