I'm patting myself on the back for finishing Winter, the album I've been working on for the last year or so.
That's all well and good, but you can't just sit back and rest on your laurels, right? There's doings a transpiring!
It's what those doings are that might, or might not, keep one up at night.

However, in my case, what's keeping me up at night is the irrational fear of the "new", even though the "new" is simply an upgrade of what I already have.

I probably need to explain that.

This is where my recording life began. This is the Tascam 244 Portastudio, a 4-track cassette recorder. 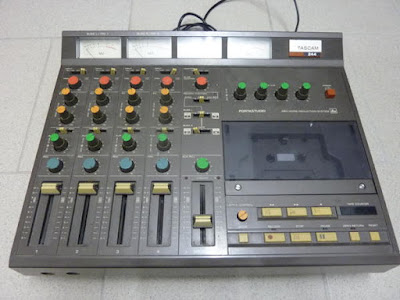 It was pretty basic and fairly easy to use once you got it figured out. Unlike today's Portastudios (I'd say modern, but it's only been 30 years, which dates me, but hopefully, not that much), the 244 had no built-in effects and all the inherent limitations of cassette tape. It did have Dolby noise reduction. Consequently, I had to buy my own outboard gear for things like reverb, chorus, flange; stuff like that.
And I made a lot of recordings, 8 albums worth. But like all things analog and tape derived, it ran out of gas. As this coincided with my running out of musical ideas and the presence of children, I put it away and took a break.

The break lasted 25 years. So when I got back into recording, I got what was the latest iteration of the Portastudio, the 2488neo. 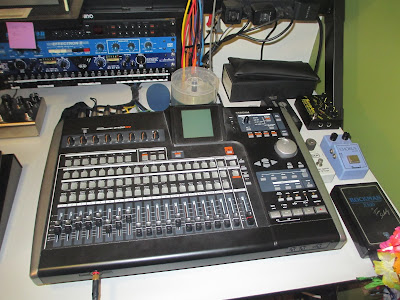 This what I've been using for the past 5 years, though I've had it 10, but That's another story.

It's worked really well, but with all things computerish that contain mechanical devices, which in this case includes the hard-drives and the CD player/recorder, 10 years is a long time and ominous signs like noise and noticeable heat coming off the machine are not good indicators of many more productive years. Consequently, I decided to buy a new one: the DP-32sd Portastudio 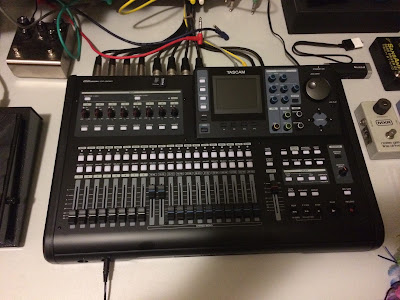 Now a fair number of you may be wondering why I didn't just go all computer, with Pro Tools, or something similar?
Excellent question!
2 reasons: I'm cheap and I'm lazy.
I'll explain.
If I went to a straight up computer system, I'd need the computer, the software, the monitor, the interfaces, and probably, because I'm a tactile kind of guy-musically speaking-a mixer. That a lot of money, a couple grand easy. And, you have the learning curve that goes with migrating to the new system.
At least with the Portastudio, I know what I'm getting into, and, hopefully, learning what they've changed in 10 years won't be too bad. Plus, at $600, and given everything it does, that's a steal, a total bargain.

Now I just have to get off my dead butt and get to it.