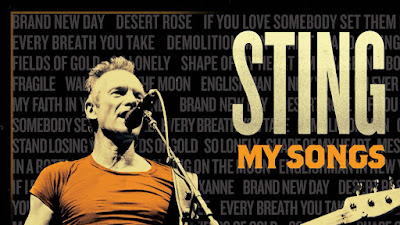 I don't often do reviews, but there are interestings questions being asked by Sting's latest album release, and as an artist whose purpose in life, maybe, is to leave behind a recorded history of my songs, I think those questions are relevant.

Simply, Sting My Songs, is an album of his well-known songs redone... but not re-imagined in the sense that he approaches them differently; there are no heavy metal versions or classical versions. The songs sound remarkably familiar with much of the same orchestration. The differences lay chiefly in the tone, occasionally beat--he seems forever trying to find the right groove for If You Love Somebody Set Them Free--and most notably, production.

The song list is made up of his most popular, stretching from the Police to the present. All in all, it's a nice set of songs Sting fans know and love, fine tuned but not too much, so the opportunity for disgruntlement is low.

The first question is why do this?

As is pointed out here, mostly to appeal to a younger audience more attuned to streaming and that hip pop sound that is too loud and overcompressed. That leads to the question of why bother since anyone, regardless of age, if interested, will want to hear the original rather than a rehash. And imagine the sonic landscape if every artist decided to reimagine and re-record the popular songs from their catalogue.

THE big change in the songs is in their production. The arrangements stick, for the most part, to the original, but add more "modern" sounds that weren't available when the songs were first recorded. I don't have a problem with that: do what you like. But the production values are what are most jarring when listening and having the originals bouncing around in your head. Personally, I don't care for the mixes and the compression. One of the things that Sting is known for is leaving room in his recordings so all the instruments are heard, and there are moments of quiet, which I think is important to songs like Fragile and Shape of My Heart.

There is also, I suppose, the notion that some songs, I'm thinking Police songs, were recorded in ways that rankled Sting, and now he can have a version more in line with what he wanted. Fair enough, but again, if you're interested in the Police, wouldn't you want to hear them as they did them. They were a band after all.

As for me, turning inward, would I re-record some of my old stuff? I have, but that was due to an inferior recording. The only problem with re-recording what was originally recorded on the 244 Portastudio is it would merely be a latter day reproduction and I don't know that I could add anything emotionally that isn't already there. And since they're good recording, given their inherent limitations, I see no reason to redo them.

Plus, unlike with Sting, there's no market for them.

On the whole, it's a good album-how can it not be with these songs-and once you attune your ear to the production changes, quite enjoyable. I won't replace the original copies I have-I'm quirky that way-but that's just me.