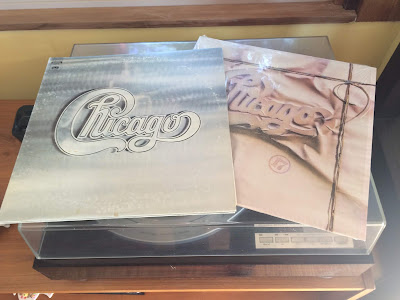 There are, for all of us, iconic bands or groups that, for whatever reason, stick with us for the rest of our lives. For me Chicago is one of those bands.
Why?
Because they had a trombone player. Because, at the time, I was learning to play the trombone, silly as that sounds. Here was a band playing socially conscious rock with a swing/jazz feel to it.
It's been 50 years since the first Chicago album came out, as yes, I know that dates me, but we all grow old.
I started thinking about all of this after watching their biopic on Netflix. There was the usual about the road travelled, the changes in personnel, from the death of Terry Kath, to Peter Cetera leaving, and the subsequent squabbles, which to me seemed childish, but I wasn't there, etc.
And, most importantly, there's all that music. If nothing else, the band Chicago was prolific. This isn't old dudes reminiscing about the 5 albums they did in the 60's and 70's. And while I don't mind the ballad period of the mid-70's, or the 80's for that matter, I am a child of their early records, Chicago Transit Authority, and Chicago II and III. That is the period that I like the most because it was the most inventive and the most expansive.
They were riding the first wave of their popularity, when they could do what they wanted because other bands were and the records were selling. I don't think any other band put out their first 3 albums as double-albums. The albums had straight ahead rock, jazz rock, pop, classical, and some stuff that was just there, like Terry Kath burning up 7 minutes in Free Form Guitar; a compendium of distortion, fuzz, and whammy bar channeled through an amp. Weirdly, it's not terrible.
Most of all, there was the horn section, including the trombone, which was not an afterthought, or a little background filler. They played and played and man, I dug it.
Perhaps, more interestingly, it still sounds tight, hip, and fun. Sure, some of it wears it age like love beads and those leather vests with fringe and embroidery, but musically it has retained its authenticity as music even if it didn't change the world.
But then, nobody does...
©2019 David William Pearce
Posted by Mr.Primitive at 3:59 PM