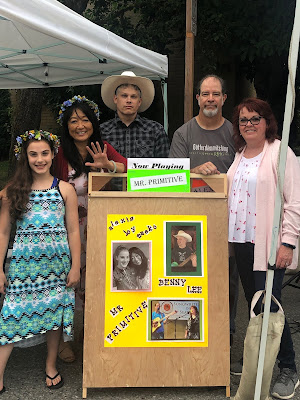 On the 8th of August, my merry band and I entertained the good folks at the Snohomish Farmers Market. It was a lot of fun.

Mostly, and for some this is distressing, we're background music, something to listen to while checking out the different stands at the market. Of course, people do look over as they pass by and many do stop for a moment or two to check out who exactly is making the music they're hearing.

Unlike a number of the other performers that play at the market throughout the year, we were playing all originals, no covers, and as we were obligated to play for 3 hours, that's mucho original. Not many artists have that much original material unless they've been writing and playing for many years. I have a lot of songs and it was fun to play a couple of long sets.

Because it was 3 hours, and because I've been meeting and playing with some fine local songwriters, I asked a couple to join the Fabulous Nancy K and me. Benny Lee and his daughter, Alexis, and Joy Taeko each played a set and we all mixed it up on a number of songs.

And I think the people at the market enjoyed the variety the 5 of us provided. The kids especially. There's something simply joyous in having a child stop in their tracks and watch, almost mesmerized by the players before them. That's why you go out and sing, why you put up with the loud cars passing by and the guy who thinks the best place to yack at his buddy is right in front of the performers.

Other than that though, a great time, great atmosphere; worth every moment.