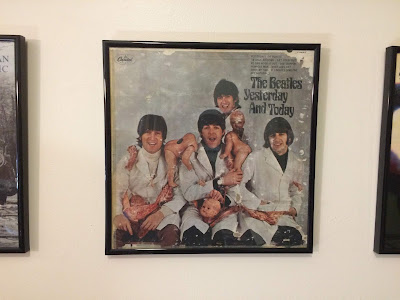 A few further thoughts on 50 Years Ago Today...

Apparently, the Beatles are still well known and income generators for their label. I'm shocked! Well, not really. Despite the fact that both John and George have died and Paul and Ringo are well into their 70s, Beatles music remains popular even among kids. This continues to strike me as odd. Shouldn't they be obsessed with their music, the music of right now?

But then, having thought about it, a few other thoughts came into my head about what exactly I was listening to when I was young. Like today's kids-they probably hate that term as much as we did-most of what I heard was on the radio. If something really got me going, I went out and bought the record. I assume today if you hear something you like while streaming, you can add it to your personal playlist. I don't know if the kids then listen obsessively to it like I did, but I assume they do because I don't think they're that much different from us.

Of course as I got older my interests expanded. I still like and listen to Jazz regularly and have a soft spot for the music from the late 40's through early 60's, and yes that includes everything from the somnambulistic languid stuff to the crazy bebop that is Jazz's version of speed metal. I also got more into Americana and Classical.

Good music is good music no matter its age.

And while streaming has its critics, as all mediums do, it does afford listeners the ability to stream whole catalogs, which was impossible back when I was young. Much as I wanted to hear the bands and musicians I read about, hearing all of them would have been very expensive and time consuming as not every record store had the albums and radio certaining didn't play entire catalogs or even albums back to back.

The bigger question is how imprinted the music is to those who stream if they're hearing lots of different bands and musicians but not hearing the songs over and over as we did in the past. It's possible the reason music from 40 or 50 years ago is so impressed into kids minds is that we, their parents, played it all the time when they were young and whether they like it or not, the do remember it.

So whether today's music is as well known as the old stuff, I guess we'll see, but I think it will be just maybe prompted differently because it was absorbed differently.