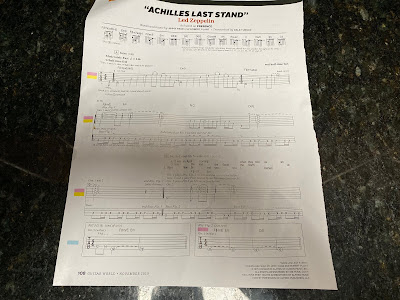 Occasionally, I get it in my head to learn a new tune, one that's not my own, or a part of a song that I think is just too fun. The beginning of Led Zeppelin's Achilles Last Stand is one example. It's basically going back and forth between a F#m(add) and Em9. Simple right?

Except when you can't get your fingers where they're supposed to go.

Now there are cheats which require a certain level of dexterity and speed since you're not setting your fingers in the structure of the chord and simply picking the strings in the order set out on the page. I don't have long elegant fingers and I'm no longer young and supple in my movements-that matters. It's why there are no old prodigies.

It also explains why some can effortlessly play like Stevie Ray and the rest of us can't even as we studiously try our best to master sweep strumming and picking. Just watch the videos and watch their hands and fingers as they move along the fretboard. Yes, some of it is the result of lots of practice and playing-wood-shedding if you like. But they also possess the physical talents the rest of us lack. Just like premier athletes, premier musicians have the skill and dexterity the rest of us don't. That's the way it is. Only so many people can play Rachmaninoff properly and effortlessly-at least as those of us in the audience perceive it-they too work very hard at that appearance of effortlessness.

It's also the reason why when we listen to people trying to play some of this stuff it doesn't sound quite right or like the original. All of us can play a passable version of Freebird or Stairway to Heaven, but they're not that tough unless you want to nail it and not everyone can. But again, it's not like trying to nail a Joe Satriani solo (or entire song) or the twin solos played by Joe Walsh and Don Felder on Hotel California.

At this point you maybe asking: "What are you getting at, Dave?"

Well, you can give up-for me that means 32nd note solos that are for the most part flash and bang-or you can work through it and inevitably discover something you didn't know before, so you gain from that.

That, and a better appreciation for the talents of those who can play what you can't.