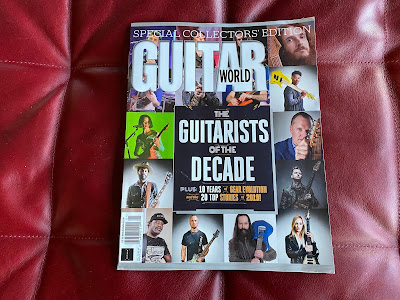 I am depressed. Turns out I was not voted guitarist of the decade. Gloom and despair shall haunt me for the rest of my days! When, oh, when, will my talents be understood and appreciated?

Like anyone who plays an instrument, there are those who leave me in awe. From Charlie Christian, through Django Reinhardt, to Hendrix, Van Halen, Satriani, and Eric Johnson to name just a few. Listening and watching them, I've been influenced and discouraged all at the same time. My talents, it turns out, only go so far and sadly not to their level.

And probably never will.

But I still work at being able to play what I need to be able to play in the service of the songs that I write. And that is what is most important. If you play, either to perform or record or both and you don't want someone else to play the parts, then you have to rise as far as you need to.

I started as a strummer because it was the easiest way to play and because at the time it did the trick. But as I heard the songs in my head, I knew I'd have to learn other styles, most importantly, fingerpicking and lead, neither of which I was any good at. After a while I got better at them and became confident enough to do those parts myself.

Occasionally, people will compliment me on my playing, which is nice and which I'm reticent to accept because I don't consider myself to be particularly good, but that comes from comparisons with famous guitarists, which are not fair because there are only so many truly gifted guitarists out there. There are plenty of local guitarists who can play me under the table let alone Clapton, or Beck, or Tommy Emmanuel.

But in the service of the songs I write, my playing is pretty good and I think that's what they're complimenting. Which is nice and that's what I appreciate.