All the Answers in the World are on My iPod 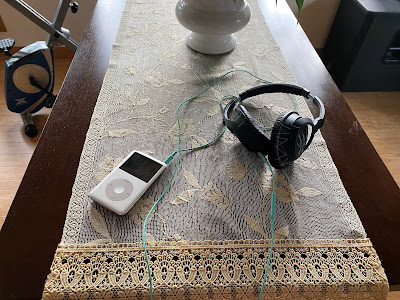 I've been listening to music my entire life, which now spans 60 years, a fact I will admit annoys me. I can't stop it or reverse time-that presents its own perverse problems-but the icy hand of death is certainly closer than it was, say, 40 years ago.

But this isn't about that. Because I've been tethered to music for all of my eternity, to be without it would be the same as being without oxygen. Fortunately, I'm not alone in this regard.

It is, though, about the magic that music grants me in the mundane tasks of existence that burden me on a daily basis. As it is Fall and as I have a fairly large treed lot, leaves and the detritus of the season are there for me to endure. Raking is its own heaven or hell depending how you look at it, but aside from the manual labor, raking, given that I will be spending close to 24 hours combined over the Fall cleaning up, will give me long periods of uninterrupted time to listen to music.

This year I decided to go back to that decade that is so much like the one we're in, with some minor exceptions, the 70's. It's not exhaustive, only 378 songs, but representative of all the stuff I listened to during that time be it from radio, records, or live from the performer's mouth or instrument. I won't bore you with who's on the list: we all have our own, assuming you have an interest in the first place, but I consider it fairly representative of the decade.

Along with it giving something to preoccupy me; yardwork, after all, isn't particular exciting on its own, the music does so many wonderful things: First, it grooves, whether rock, jazz, country, instrumental, fast, slow, sweet, or sad. And yes, even disco! Second, as is common with all things memorial, it evokes the past, certainly for me as I happened to be alive at the time. Third, being music of the recorded kind, I keep my ear tuned for what is being played, on what, and how it is produced.

In some ways this is the most fun, because none of the tunes is new to me in any way, I end up listening to sounds, phrasing, placement, arrangements; fun stuff like that. It is an endless cavalcade of ideas and inspiration.

I highly recommend it if you have any aspirations to record.

Or if you have a yard full of leaves calling your name.