The Record as Icon 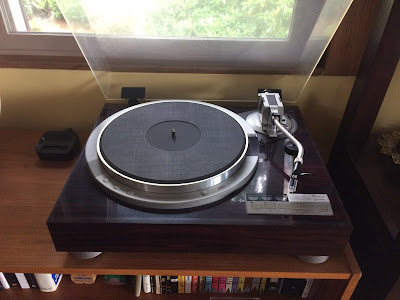 As someone of a particular age- read old -I am less inclined to the recent fascination and elevation of vinyl, or as us oldsters used to say, records. I'm not against them, in fact, as the photo above can attest, I still have my phonograph, record player, which I still use from time to time.

Mostly while watching sports because the play-by-play and commentary has, of late, become just a lot of background noise. Why not listen to something more interesting? With 4K hi-def, I won't be missing anything visually.

But this isn't about that.

No, this is about the elementary nature of playing records, which I imagine is part of the renewed interest in buying and spinning platters. Hipsters, anyone?

Naturally, in order to play records, one needs a record player, also referred to as turntables and phonographs. A quick review on Amazon finds many available from the portable, which were popular when you wanted to play anywhere, to $1000 Japanese imports. And for those with lots of extra dollars, there are the high end models that cost as much as a car.

Then there's the fun of getting up to flip the record (don't forget to clean it).

None of this is new to someone like me, who lived through the great age of vinyl in the 60's (probably the 50's as well, but that predates me) through the 80's, when CD's made their play. The irony with the whole record thing is that the quality of sound, which is what the Dad's are swinging, man, because records are king, is predicated on the entire signal chain, meaning that everything from the phonograph to the amp (preamp)/receiver to the speakers, including the wires, plays into how "good" your record sounds. This is minus the inherent limitations of vinyl to begin with, but that's old hat.

That means if you buy a $50 tabletop phonograph with built-in speakers, it probably won't sound any better than the MP3 does through tinny earbuds. For those more discernible listeners, there's the thrill of component matching and how long you'll be paying for it.

As a case study, I have a JVC QL-Y55F turntable, a Yamaha R-S300 receiver, which replaced a preamp/amp combo many years ago, feeding AR28 bookshelf speakers. The turntable and speakers I've had for 30 plus years. I spent real money on this stuff and as I've had them for that long speaks well of them. I have had to replace the cartridge on the turntable and both speakers have been reconed, but other than that, they still sound great... to my ears.

The point of this, as it has always been with audio, is what you hear is what you buy and what you buy, outside of budget, is subjective because, hopefully, you listened before you bought. And that is true of any media you listen to music through. I don't play heavy bass driven stuff through the AR28's because it beats the hell out of them; they're not built to move that much, but anything out of the classic period mentioned above sound great... to me.

And that's the whole point.