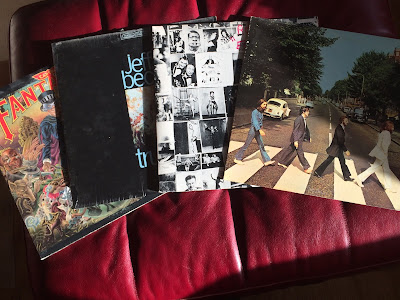 50 years ago, the Beatles Abbey Road was released. Much has been written about the last Beatles album, and for those of us holding on to our old vinyl copies-see above-the obvious opportunity to vouchsafe our good taste and prescient abilities to know well in advance what good music is.

As well as use words like vouchsafe and prescient. Right?

Anyway, I feel quite confident that the "50 years ago today" theme will continue unabated till a good many of us are dead. Why? Because 50 years ago was, and this is considered by many, the beginning of the great age of rock music as it morphed from rock and roll-though many still called it that-into the colossus that we now refer to as ROCK!

And this looking back is most striking from the UK, given that the British invasion was at its zenith during this period.

The question I have is how far into the weeds, so to speak, do you go?

Think about all the significant bands from that period, from '69 to '75, just from England: the Stones, Moody Blues, Pink Floyd, Yes, Emerson, Lake, and Palmer, King Crimson, Genesis, Led Zeppelin... Then, of course, you have Jeff Beck, Clapton, Elton John, Lennon, McCartney, Harrison, Starr, and all the ones I can't think of at the moment but will the minute I finish this post. The next 5 to 10 years can be one album after another after another...

(Please feel free to add your own favorites.)

And then you can argue about punk!

Individually, I'm not adverse to a reasonably amount of looking back; Abbey Road was the final album from the seminal band of 60's and very much a precursor to their solo work. And much from that period, like Exile on Main Street, from the Stones, is considered the apex of their creative output.

For me, these retrospectives should be about how the albums impacted the musicians after them, and the musicians they borrowed from-with examples! As this is the great Boomer look back at our time musically, it ought to be more than a continuation of "ooh, look at us".