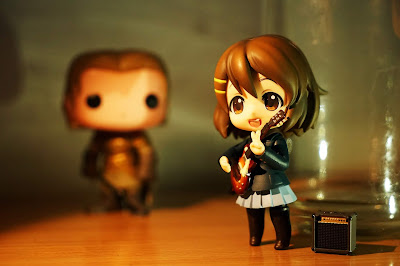 Hmmm. At the risk of being redumbdant, I'll say again how fascinating this is. Think about it: people are already following, in good sized numbers, AI created musicians and entertainers. I italicized musicians for the very real reason that they're not! An avatar, hologram, program with a visual interface, won't be dazzling you with their technique while you stand 5 feet away because they don't physically exist...

But that's beside the point.

What is the point is that we humans are so predictable in what we respond to positively and negatively. AI listens to what we listen to, tracks us, and replicates it, time and time again until it knows exactly what we want to hear. And given the power of computing these days, it can be tailored individually.

Let's see Taylor or Katy or Lorde do that!

They will, of course, dispute that, saying they're doing their own thing, even though their management, representatives, label use the same algorithms to study their fans in order to keep them buying, buying, buying as the AI created popstars, like Lil Miquela. Now they just have to figure out how to keep from aging out, something their AI competitors don't have to worry about. Lil Miquela may not stay popular, but she'll never be 40 or 50 doing nostalgia shows at a casino. Or like Poppy, they can pretend to be cyborgs.

Am I being harsh, mean?

Sorta, but pop itself is based on fads and stereotypes and the music is hardly nuanced and thoughtful-mostly it's hooks sung over and over until your head explodes. It's aural candy. Like its confectionary equivalent, it can be fun and dancey and mindless. It's not philosophy, but it has no real value, nutritional or otherwise.

So if you're a serious musician or singer or songwriter, all of the above means that your art is what you make of it and the realm of pop probably isn't going to be the land of milk and honey if it ever was.

But it certainly tests the limits, assuming there are any anymore, of where popular music is going.