It Just Keeps Getting Better... 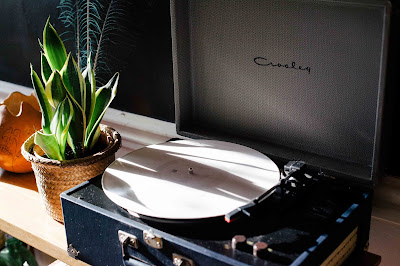 As frequent readers of this blog will note, I find the whole vinyl craze fascinating, to say the least. Now, I found out, I'll soon be able to manufacture my own vinyl records right in the privacy of my own home! If there's one thing I need, it's a bunch of substandard records cluttering up the house. After all I already have 600 albums that I bought mostly in the 70's and 80's, and I probably have another 600-700 CD's. I think that's a lot, and it doesn't include downloads, but compared to some collections, it's fairly puny.

Who knows how much all this will cost. There's not only the machine itself, a couple of grand-I'm going to assume it also has a play feature-as well as the cost of the vinyl blanks and whatever system it's plugged into. That in itself has costs, but I've gone into that many times before.

As this article in Fair Observer notes, how we hear sounds matters, that there is a quantifiable difference between headphones and speakers and actually being at a concert where real instruments and voices are not only heard but felt. That in a nutshell is why performance will never die out and may in fact proliferate as AI and other artificialities pervade all of our personal spaces. I whined about this last week.

I realize that there is an esthetic to records, that they require a certain level of activity and care that CD's and MP3's don't. They're bigger, they should be cleaned each time they're played; the cover art and lyrics, if included- not that many artists provided lyric in yon olden days- are easier to see, and they took up a lot more space. But that was a point of pride to collectors, that wall of albums no one else had.

There's also the inherent limitations of the medium and therefore limitations on how much you can shove onto it.

Recording and mastering engineers will undoubtedly be shaking their head at the idea that what I stick on my records through a USB connection-which means digital to analog-will be any good, that instead will produce any number of sonic and space problems, especially where highly compressed LOUD recordings are transferred to vinyl. That assumes that the people making these records are deeply discerning audiophiles.

I'm thinking no. It's a novelty.

Maybe that's the allure of the home make-your-own-record machine. Yes, that wall there is a collection of my records of other people's songs, although there may be my own stuff too. More likely, it'll be akin to all those mixtapes we made before iPods and their ilk made it much easier to put all your music on one convenient device. And mixtapes, like old records, have a special place for those who grew up with them. They also weren't known for their high fidelity, but that wasn't the point. The point was to have the songs you like in the order you liked and not what some radio DJ kept playing which sucked.

As a final thought... I've yet to read of anyone advocating for the multi-stack record players of my youth where the records would be stacked on top of one another and then flop down after the previous record played. While convenient, it was also scratch inducing, which all audiophiles of the time abhorred. I assume they still do. Of course, most of those people who had multi-stack record players didn't save their records anyway.